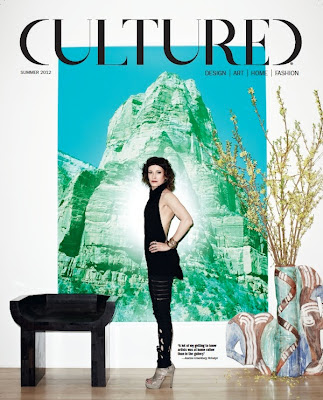 From 7-11pm the decisions the artists make as to how they will be represented in a single image to be featured in the September issue of CULTURED magazine will be exposed and questioned. The open dressing room will be located on the second floor of the Buena Vista Building.


Please note: the photo shoot set is closed to the public.


In Amanda Sanfilippo's forthcoming book, "21st Century Portraits," she suggests that "the introduction of reality into portraiture changed it forever, and the shift between photographic documentation and artful representation has become a fine, flustered line." The key element in the hybridization of artistic representation and Relational Art is the awareness of self. With the current state of mass distribution and accessibility, the awareness of self and the exposed surrounding details become of utmost importance in the perception of a given subject. Jillian Mayer's practice comments on our (and her) current obsession with the world within the Internet and the consequent memes*, yet in a sly way that simultaneously cultivates "Jillian Mayer" as a meme in it's own right.


Miami's own bass warrior Otto von Schirach recalls; "When I first started doing shows, I realized the importance of looking like what my music sounded like. And that took me into a zone, a Bermuda Triangle energy zone." What is added here to the ideas of image and identity is a physical presence. David Rohn's practice has investigated for years the ways in which various identities are presented physically, creating personas in the process. Rohn states that "presence is the single most significant aspect of performance." Regardless of the layers of image or language applied to the various identities, Rohn's own energy projects through the highly produced façade.


The awareness of the artist's physical body is more specifically used as a tool in the work of Antonia Wright. Wright uses her body as a way to create "a dialogue with issues outside of [herself]". In a way she pinpoints as "visceral," her surroundings are filtered through the experience of her body, and presented via this physical experience. It is important to note that Wright is aware of the fact that she can only truly exploit her own body. This limitation lends itself to the use of representation within the context of contemporary art as a way to effectively portray her experiences, be it in video, photography, or live performance.


The awareness of context, regardless of image or identity, is often disregarded in the work of A.G. Viva. Context is an interesting paradigm in that it directs and alters perceptions, but in a way that is rarely center stage. Viva currently uses context to frame not only his work in contemporary art, but his role as the artist of that work. Viva's image and identity within that framework can easily shift and sway as he sees fit, manifesting a romantic reality that extends beyond the canon.

* UrbanDictionary.com defines a "meme" as:
1 : an idea, belief or belief system, or pattern of behavior that spreads throughout a culture.
2: Used to give a bit of pseudo-academic gravitas to stupid viral shit.